I have just completed a book considered Anthony Trollope‘s greatest: The Way We Live Now.  RIght up there with MIddlemarch, LIttle Women and The Adventures of Huckleberry Finn in the Guardian’s 2003 list of the top 100 novels of the English language, this humorous epic is a scathing take-down of the corruption of the Victorian Era. It is also a reminder that there is nothing new under the sun.

Mr. Melmonte, the vulgar and shady branding genius who tricks all of London into believing he is the richest man ever, looms large over the silly and gullible noblemen who believe he will help them become rich as well. It was scathingly reviewed at the time, perhaps a sign that Trollope had hit too close to the mark.

In reading, take care to scrape aside the requisite dollop of anti-semitism that leaks out of the mouths of these hypocritic Lord and Ladies and catch the glimmer of xenophobia they use to excuse their reckless greed. The love stories are sweet, the comeuppance is satisfying and while no more “real” than much on offer today, it is a very nice way to spend many hours if you aren’t spending it on the news of the day.

The 2001 BBC miniseries version starring David Suchet is much faster than the novel and leaves out some of the entertaining side stories but if you want to spend the time, can I recommend buying the Amazon Kindle version (currently $0.99 ) and then the 45 hour linked Audible version (currently $3.49) so that you can pick up listening right where you left off reading and not miss a moment of the fun. I know there are people who argue that listening to a book is not “reading” it, but they don’t hear/see what happens in my head when I read. For me, listening to someone read creates the same internal visions of the scene as reading the words myself, probably due to a childhood spent with radio instead of television. (I will write a whole post about radio later.)

As far as art goes, when I venture into Facebook (on the principle that my friends are mostly real) I enjoy the daily images of art from the pages of I Require Art.  I spotted a painting by a recent featured artist during my trip to the SAMA with my brother and am glad to see Kehinde Wiley’s work featured in my feed. His portraits of African Americans against pattern backgrounds are visually inspiring, considering the pattern work I have been doing lately. 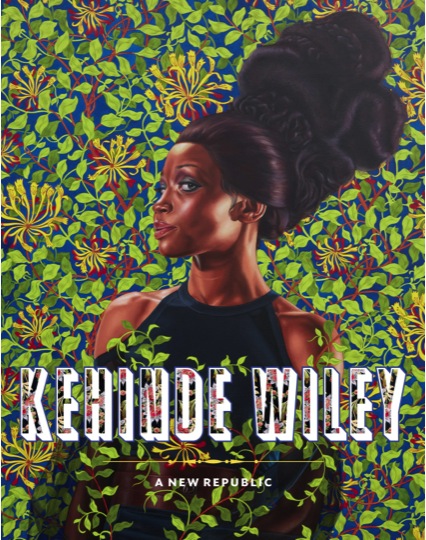 As far as  pattern for the day, I have this colorway from the Oak Leaves pattern that I featured yesterday.

It reminds me of the living wall that Anders and I saw at the Google Fiber headquarters in Austin.

This site uses Akismet to reduce spam. Learn how your comment data is processed.

This blog is a record of 100 days spent focusing on the "real" in life.